"This is WoT baby" - by Giampyx

Members of the AIF ready to move against the enemy, in Italian Carro Armato M13/40 and M11/39 medium tanks captured at Bardia in Libya and taken over by the Australian Forces.
Tobruk Area, 23 January 1941

They were manned by members of the 6th Australian DivisionCavalry Regiment during operations.

(Note the Kangaro symbol prominently displayed on the sides and turrets.)

The 6th Division Cavalry Regiment was the first Australian unit to go into action in the Second World War, when they contacted the Italians at Fort Maddalina and Fort Garn on 11/12 December1940.

The bulk of the Regiment was engaged in actions around Siwa and Giarabub, using Machine Gun Carriers and trucks. A Squadron, under Major Denzil Macarthur-Onslow, was detached to the Western Desert Force and, equipped with only Carriers, assisted in the capture of Bardia in January 1941.

A Squadron was partially re-equipped with Italian Medium tanks, captured at Bardia, for the assault on Tobruk. For this action the Italian Tanks had large white kangaroos, part of the divisional sign, painted on the sides and turrets in order to make themselves known as friendly forces. Of course, with the dust created by their movement the signs were quickly obscured and it was fortunate that they were not engaged with “friendly fire”. It is quite ironic that the first time Australian Armoured Troops went into battle with tanks, as opposed to Machine Gun Carriers, that the tanks were captured enemy vehicles.
Tobruk was captured, the Australian Cavalry being used to cover the deep penetration by the 19th Australian Infantry Brigade to destroy enemy artillery. Only seven of the captured Italian tanks managed to complete the approach march, with only one finally reaching the Italian defences.

(Colourised by Royston Leonard from the UK) 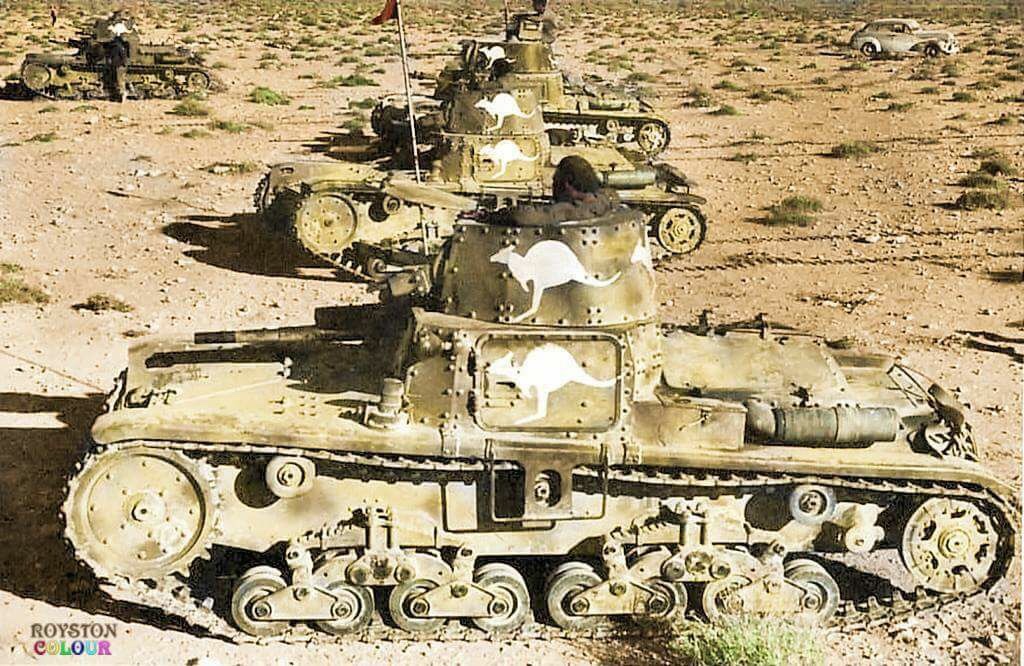